There's been a spooky amount of activity in the FreeCAD & Debian Science world since I last wrote! Because this update covers August, September, and October, I'll try to be brief and only touch on the key points. 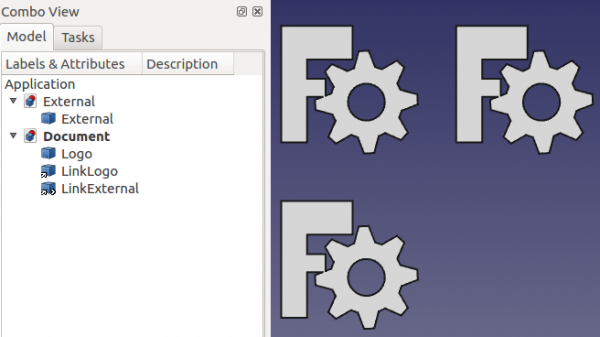 The "App::Link" object allows lightweight linking of objects in a document and from external documents.

In August, a major milestone towards unified, mainline mechanical assembly functionality in FreeCAD was reached.

One of the core challenges in implementing assembly functionality is the problem of topological naming. In a CAD model there are topological entities, such as solids, faces, edges, and vertices. We must choose some algorithm to name them so that you can refer to relationships to make an assembly. A simple example would be two cubes, connected by touching faces. If a parameter in your model changes, and after recalculation, your "Face_N" is on the wrong side of the cube, your assembly may break, or not be what you are expecting. Without a good approach to topological naming, parametric FreeCAD models won't be robust to changes and recalculations, which defeats the purpose of parametric modeling.

Because this is such a difficult problem, progress has been slow. However, recently a relatively new FreeCAD developer, 'realthunder', put significant work towards this problem, with a solution finally on the horizon. Because it required major changes to FreeCAD's internals, the review and testing period was and continues to be lengthy.

The milestone in particular was merging of a large chunk of this code, referred to in short as "App::Link functionality". This diff is huge: +70,441 -14,562 lines of C++. You can read more about it on the pull request itself.

I only played a minor contributing role in this effort, preparing a short-lived staging PPA to provide a package for testers after the pull request was opened in July, but it's rather significant news in terms of the project and so worth spreading. Mechanical assembly is (no surprise) a must-have for mechanical engineers interested in FreeCAD, and it's considered by some to be the last remaining blocker for FreeCAD's 1.0 release.

Extra links: notes for code reviewers from the PR author, for the dedicated readers out there.

The Python 2 removal in Debian Testing continues, and with it, FreeCAD's Python 2 package is gone. However, upon upload, several new build failures appeared on the i386, mipsel, and s390x platforms. Turns out there was a regression in dwz, a software I had never heard of before. I tried troubleshooting but unfortunately had FreeCAD drop out of testing due to the Python 2 removal bug filed against it.

Luckily, when I filed a bug against dwz, Matthias Klose and Tom de Vries helped isolate and upstream the problem, with Tom even bisecting the regressing commit in the upstream bug. Thank you, you two!

After adding a workaround to fix those build failures, the new Python 3-only FreeCAD package is on its way to Debian Testing.

Qt 5 & Python 3 builds for FreeCAD have been available on Ubuntu 18.04 and newer and Debian 10 and newer platforms for some time now. However, Ubuntu 16.04 was problematic due to its old Qt version, which meant a Qt 4, Python 3 build had to be produced. This had been on the back burner for a while because when I initially attempted backporting the necessary packages, I encountered some friction.

However, since it's the last holdout Python 2 platform, I took another look at things to try to speed up the "py2ectomy". It turns out that the missing package needed for a Python 3 build, pivy, was failing to build because of "PIE hardening", a Debian security hardening flag. I had all such flags turned on, so I just had to disable that particular one to get things going.

So, Python 3 builds are now available for Ubuntu 16.04 in the FreeCAD Daily Builds PPA, and they will be coming soon to the stable PPA as well. A new bugfix release has been made for stable, 0.18.4, so I am working on that first, and the Python 3 package will come with it.

Integration with Netgen, a mesh generator, has long been an optional but off-by-default build option for FreeCAD, due to packaging difficulties. However, since I have taken over things in recent years, I have finally gotten things to the state where we can turn this back on by default. As part of this change, I am also building FreeCAD with Pybind11 instead of Boost.Python, marking another milestone in managing FreeCAD's dependencies.

Since this may introduce bugs, I've started by making this change for all of FreeCAD's daily builds in the Ubuntu PPA, as well as the package currently in Debian Unstable. Eventually, this change may come to the stable PPA. 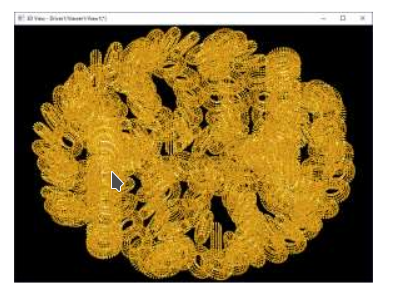 After more than a year of development (PDF warning), a new minor version of OpenCASCADE Technology (OCCT) has been released.

OCCT is the geometry & topology kernel of FreeCAD, and it is also a dependency for several related projects including Gmsh, IFCOpenShell, Netgen, and OpenCAMLib. New releases in OCCT generally herald stability and performance upgrades for core behavior. However, there are some breaking changes and so these improvements are yet to be seen.

For the time being, OCCT 7.4.0 packages are available in my OpenCASCADE PPA and by building the package directly from https://salsa.debian.org/science-team/opencascade.

I uploaded the latest version of OpenFOAM, the toolbox for computational fluid dynamics. It's now available in Ubuntu 19.10, Debian Testing, and via the FreeCAD Community Extras PPA.

The latest version of Gmsh, a 3D finite element mesh generator, is also in Ubuntu 19.10, Debian Testing, and the Community Extras PPA. Thanks to Nico Schlömer for helping maintain this package.

This version of Netgen is only available via the FreeCAD Daily and Community Extras PPAs. Unfortunately Netgen has been stuck in the Debian NEW queue for over 8 months now.

I was accepted into the GitHub Sponsors program! GitHub is matching donations for the first year. Hopefully this helps fund my FOSS work, and FOSS work in general.

Thanks for your support

You can get in touch with me via Twitter @thekurtwk.

If you'd like to donate to help support my work, there are several methods available on my site.